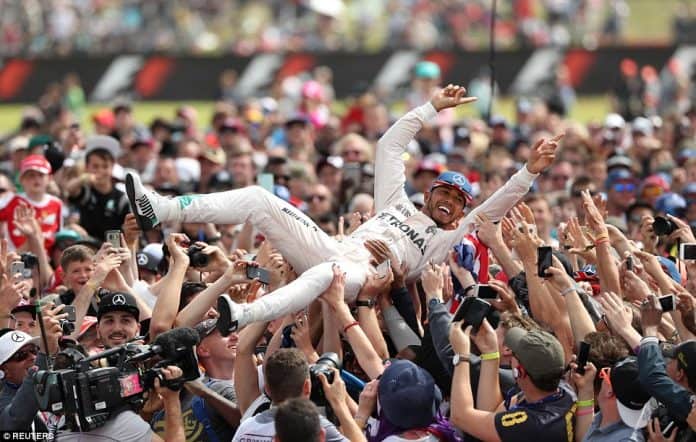 When his back’s against the wall, there’s no better driver on the grid who can deliver as Hamilton. Such was his dominance throughout the entire weekend. In this week’s British GP Review 2017 we discuss how Lewis maximised this weekend’s points to get within a point of Vettel, plus we discuss just where Ferrari got it wrong.

In qualifying Lewis has almost half a second ahead of the next best driver and during the race he took full advantage of his position to take the chequered flag. He now levels both Jim Clarke and Alan Prost with 5 wins at Silverstone.

But it was twice as rewarding for Hamilton to see championship leader Sebastian Vettel stuck behind the rear of Max Verstappen’s Red Bull, which gave both the Brit and Valtteri Bottas a clear run and put the Mercedes drivers comfortably in-front.

In contrast Vettel had a mare of a race, getting bogged-down from the off and losing a place to his team-mate Raikkonen and Verstappen by the fourth corner. To make matters worse, just two laps before the end, Seb had a front-left tyre failure which saw the German drop from third to seventh. It summed up Vettel’s weekend and saw his lead contract significantly to just one point in the championship ahead of rival Hamilton.

In similar fashion Raikkonen was dealt a similar fate where the Fin looked comfortable to take second place but tyre failure again the lap before Vettel pushed the Fin back to pick up the last spot on the podium to third place.

Mad Max makes it back

Christen Horner must have breathed a huge sigh of relief as wonder-kid Max Verstappen crossed the line to take a respectable fourth place. It was in part due to both Ferrari’s hitting trouble towards the end, but Max will be pleased to have at least completed the race as his last 5 race s resulted in retirements in one way or another.

Overall the Red Bull team did a decent job of mixing things up at the front, hampering Vettel’s attempts to keep-up with his team-mate and Hamilton before the first round of pit-stops.

All square between rivals

So at the halfway point of the season it’s all square between Hamilton vs Vettel with just one point separating the two and given the performance of both drivers and the heated temperament of Vettel in Baku, it’s only likely to intensify in the second-half of this season.

Valtteri Bottas’ incredible recent performance, picking two wins this season and keeping a decent run of form has put the Fin just 23-points behind Vettel. If he continues to stay out of trouble and gradually close the gap on the leader we could see the Fin getting in the mix for this year’s title.

Given his current form and confidence, not to mention no pressure to win the title, Bottas would be a real decent option to bet for winning the 2017 crown.