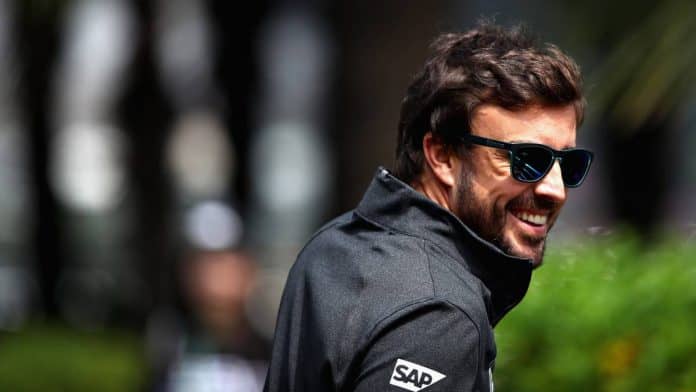 Here at Betotg we like to keep the fans up to date with any changes in F1. The latest out of the Mclaren camp is that their main driver Fernando Alonso is skipping the Monaco Grand Prix to go off racing in the Indy 500.

It’s fair to say that the double-world champions talents are wasted in McLaren who just can’t seem to get a decent competitive package together. So can you really blame the Spaniard for hoping on the next plane over to the states when given the opportunity? The real question has to be if he wasn’t that happy in the first place then why continue into this season, surely if can’t be just for financial gain.

Alonso had a bigger grin than on a Cheshire cat as he considers life outside of Formula 1.

But this is not just a PR stunt for Fernando to raise his profile overseas, this will be a huge boost for McLaren not just in the united states but internationally. Even talk about the potential of Alonso driving in the Indy 500 has increased sales for the event and raised the profile of Formula 1 for this weekend. It’s clear just by looking at Alonso’s mood in recent interviews has lost the spark and desire he once had with the sport. Just the talk of his chance racing in the Indy 500 has brought a rejuvenation in the Spaniard.

Reserve driver Jenson Button is said to be taking Alonso’s place for the Monaco GP. Jenson has been keeping fit since his semi retirement and has been keeping trim by competing in a number of triathlons, so his level of fitness will not be a problem.

The real question has to be whether this is just a one-off or are we likely to see Alonso miss another race for say Le Mans 24hr? and more importantly how much of a disturbance is this not just for the reserve driver but for the McLaren team as a whole. For me Fernando needs to stop sulking and commit to the decision he made to finish off the season as he is contracted to do.

So if this is Alonso’s final season where are we likely to see him next year. Many ex F1 drivers have raced in Formula-E (electric series), Le Mans 24, Porsche Super Cup and World Rally Championship. For me i’d like to see Alonso take a sabbatical and have some time to consider his next move before diving into the next stage of his life. Drivers time behind the wheel is so short and Fernando needs to work out really whats best for him.