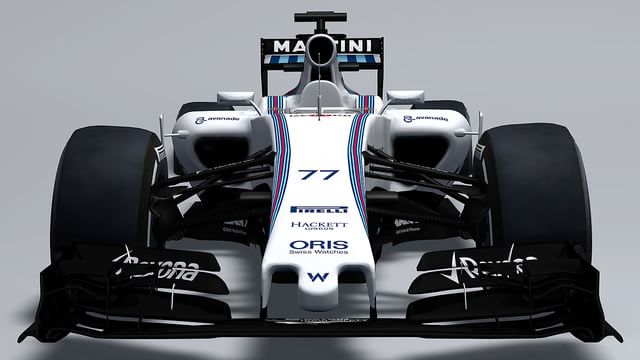 Williams F1 Team have released pictures of their 2015 car which they hope to narrow the gap between them and front-runners of Red Bull and Mercedes. Williams will hope to continue the progress they made last year were they ended the season in a respectful third in the championship, which resulted from successful races such as second place finishes in Abu Dhabi, Germany and Britain.

The FW37 will use the Mercedes turbo hybrid engine which dominated the field last year and with comments coming from Renault this week suggesting the French teams are still playing catch up to Mercedes, it puts Williams in a good position.

Chief technical officer Pat Symonds explained the differences between FW37 and last years car, in particular was the need to find extra performance from sections of the car that had originally needed to be light, he said: “We felt we came up against design barriers in the FW36 and so took the opportunity to remove these barriers for the benefit of performance. The FW36 carried a reasonable amount of ballast, so we were able to make alterations to the design for added performance without the fear of adding excessive mass.”

The team have kept with the same drivers line-up as last year with Finnish star Valtteri Bottas and Brazilian veteran Felipe Massa. The team have also signed young 21-year-old Brit Alex Lynn to be their development driver for 2015 along side Susie Wolff who tested with them throughout last year. Alex won the GP3 feeder series in 2014.

Williams won’t have long to wait to see if all of the design and development time during the winter has paid off as pre-season testing begins this weekend on Sunday 1st February in Jerez.

BetOTG continues to provide you all of the teams car unveiling and performances during pre-season testing before the championship starts in the second week of March. Be sure to keep up with all the new that’s happening on the world of Formula 1.

To celebrate the start of the new Premier League 20/21 season, William Hill has introduced a new promotion for all you acca fans. And well,...