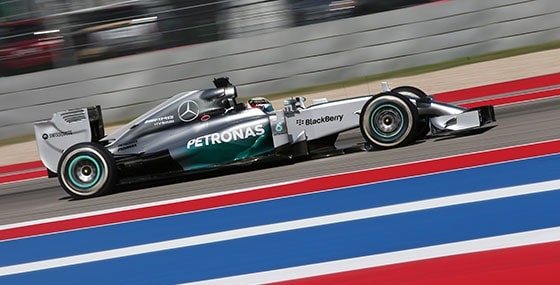 This years drivers title is within touching distance now for Lewis Hamilton as a win this weekend will secure his third world championship and cement his legacy as one of the greats.

No one has been able to keep up with the raw speed of Lewis this year which reminds me of the similar dominance Michael Schumacher had for Ferrari a decade ago. Provided Mercedes can stay ahead of the pact and constantly provide Lewis with a competitive car, the Brit who is only 30 will not only match the same number of titles as his hero Ayrton Senna, but go on to match the likes of Prost, Sebastian Vettel, and Fangio.

Lewis currently has no one who can compete, he could finish his career beating Schumacher’s title haul of seven WDC’s

So with only 4 races remaining this season we head to Austin, Texas for the USA GP. Austin may have only been on the calendar for a few years (with the first race in 2012), but the drivers certainly enjoy this latest edition to the race calendar. The track has been designed by ex-drivers and takes inspiration from some of the best tracks in the world. With a total of 20-turns and complex intricate corners and chicane its as challenging circuit.

Lewis certainly feels comfortable racing in Austin having won twice here already. And last years dominating performance can only boost the British drivers confidence as he attempts to take his third WDC.

During Friday Practice the track was battered with heavy rain and thunderstorms. But that wasn’t enough to deter Nico Rosberg being fastest before the weather turned nasty.

Currently the forecast doesn’t look good and the latest hurricane that’s hit Mexico is affecting the conditions in Austin. Hopefully as we approach Sunday the weather may be good enough for the drivers to race.

Personally I won’t be betting on Lewis winning the race as the odds are so short the return isn’t worth the bet. But given the current weather conditions and the fact the Sebastian Vettel has a 10 place penalty no matter where he qualifies, it wouldn’t be to much of a risk to bet on Valtteri Bottas at 28/1 or Kimi Raikkonen at an amazing 100/1 with Skybet. So a £10 bet would get you £1k with Kimi, now that’s an offer you can’t miss out on!