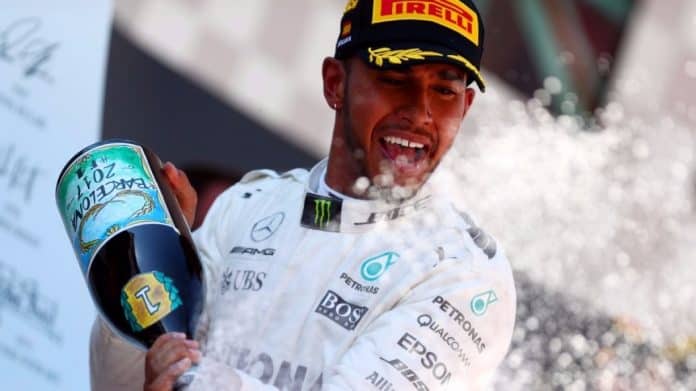 The Spanish GP was another win for Lewis Hamilton and he is now level with Sebastian Vettel on two wins each. During the race at Sochi in Russia, Hamilton looked like he was struggling with the car and not even getting a podium position must have hurt. Just 2 weeks later in Barcelona and Lewis was a totally different driver qualifying on pole just ahead of Seb.

At the start of the race Lewis lost the place to Vettel by the first corner and it looked like Sebastian might have put himself in a winning position – but Lewis had an other ideas. Vettel pitted on lap 15 which gave Lewis the lead, he pits on lap 22 which left Valtteri Bottas out at the front.

Bottas made his car very wide to back up Vettel and to get Lewis closer. It works Hamilton goes from 8 seconds behind to under 4 by the time Sebastian passes Bottas.

On lap 40 Valtteri was out of the race with engine failure. Mercedes tactics had worked as on lap forty Lewis retakes the lead and stays there till the chequered flag. Vettel was a couple of seconds behind, but it shows the speed of the front runners when third man Daniel Ricciardo was third a full 60 seconds adrift.

Vettel’s team mate Kimi Raikkonen came together with Max Verstappen doing damage to the front suspension on both cars, resulting in both out on the first lap. Max won this race last year with Kimi second, sad to see both podium winners last year were out before the first corner.

It was a good result for Force India with Sergio Perez finishing 4th and team mate Esteban Ocon in 5th. The team will be overjoyed with both their drivers with the loss of Kimi and Max helping them, but it was still a great result.

Fernando Alonso must have been pleased with the weekend. To start 7th on the grid was a huge effort with a car that has been a total dog for the last few seasons. He was very unlucky when he was forced off the track on the first lap, but still he finished the race and not a bad position of 12th place.

The next race takes us to Monaco and for one race only the return of Jenson Button as he stands in for Fernando who is off for one race in Indy 500. Monaco is a race where you need to get pole with very little chance of passing, it can be done but to pass any of the front runners would be tough.

So who will win? well we at Betotg would say if Bottas, Vettel, Raikkonen, or Hamilton qualify on pole, it would be hard not to see them winning.

It’s Not a race for an outside bet as pole sitters have won regularly in past races, still strange things happen in F1/ It’s not a high speed track so it could be talent more than speed gets the car to the flag first.