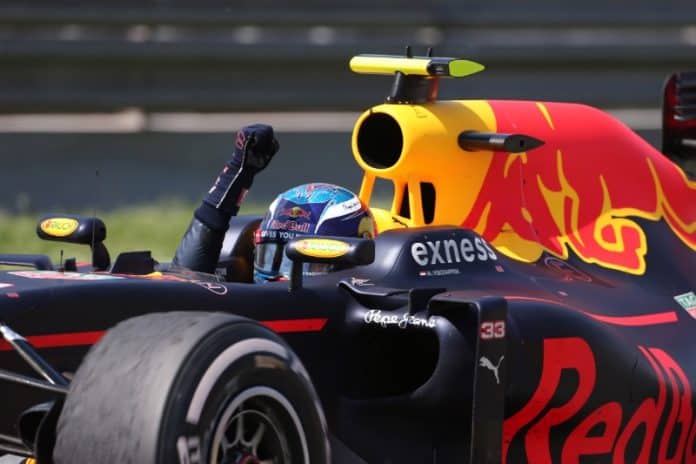 This years Spanish GP didn’t disappoint, we had action from the first couple of corners. It’s been said many times if you want to get a good return for your money don’t bet on the F1 favourites i.e. Mercedes drivers. We always say the top boys can crash just the same as the lower drivers and the odds from top of the grid to bottom can be huge. This was shown more than ever with the crazy antics of the Mercedes drivers.

Most teams tell there drivers to avoid your team-mate on the first lap, Lewis And Nico should have listened to that one. Nico passes Lewis before the first corner, coming into the third bend Lewis get better traction coming out of the corner and tries to overtake in the inside. Nico defends his line and closes the door the result is that Hamilton looses control on the grass verge and spins the car, coming onto the track and takes Rosberg out with him. Both cars in the gravel and out of the race, team boss Toto Wolf sends headphones flying to back of the garage.

Daniil Kvyat will be a very unhappy lad, he was demoted to Red Bulls second team Toro Rosso, which allowed eighteen year old Max Verstappen to move up to the number one team (and what a move it was). At this very young age and his first drive for the team, Verstappen not only got onto the podium but won the race with a little help from the Mercedes drivers.

Verstappen’s team-mate Daniel Ricciardo was not as happy, his team in their wisdom thought it was a good idea to change his pit stops when he was in the lead. Ricciardo went from a two stop to a three stop but kept Max on a two which proved to be the right decision. Daniel could not recover his early position and never even got on the podium. He could not help saying what he thought about it in the interview after the race and we have no doubt that the race was his for the taking.

The two Ferrari drivers came second with Kimi Raikkonen and third with Sebastian Vettel. Similar to Verstappen, Kimi was on a two stop strategy but both drivers were suffering tyre wear and it left Kimi unable to make a challenge in the last few laps, still a good result for Ferrari.

Fernando Alonso on his home track here in Spain, would have liked to have made a decent show, his race was going well till a fault on his McLaren meant he had to park the car on the track. Seems its one forward-two back with the team. Jenson Button did a little better picking up a couple of points in ninth place.

Another driver that drove a solid race was Valtteri Bottas. We have expected more of him this season and though he is always up there near the front he is still lacking that bit extra we have seen in previous seasons. His team-mate Felipe Massa had to start the race from the very back of the field so did not let his team down by coming eighth.