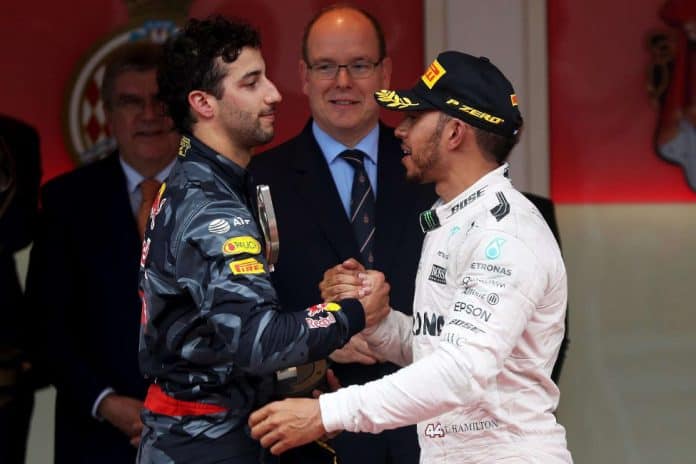 The Monaco Grand Prix was the race where Lewis Hamilton had to start his attack on the 2016 season. He has been dogged by problems every race this year, and it looked as it might continue when he again suffered a problem during the qualifying.

It was lucky for him it was in the pits, so the team had a chance to get him back out before the end of Q3, but not quick enough to stop Ricciardo taking pole.

The race started under the safety car and all drivers were on wet tyres, the track condition was very poor and the race got under way after three laps. It was not long before the wet conditions started to find the weakness of some drivers. Jolyon Palmer destroyed his car on lap 8 when he lost control after hitting the white lines.

Nico Rosberg who has been the one to beat this year and winner here for the last two years was not happy in the wet conditions and had to give into team orders to let Hamilton through in the 16 lap. It proved he was driving for the team and not just himself, I wonder if Lewis would have been so good.

Ferrari’s Kimi Raikkonen did not come off much better, he made a mistake on lap 11 hitting a corner taking the front off his car and ended up parking it out of the road as soon as he could. On lap 22 we also saw Daniil Kvyat try an overtake maneuver on Kevin Magnussen which saw them both badly damage their cars.

Some teams went from intermediate tyres as the track dried, Hamilton decided to stay on wets with race leader Ricciardo and was driving a near perfect race. When he came in to change onto inters his team did not seem to know what was going on.

They did not have the tyres ready and after what seemed like an age, sent him on his way, as he exited the pits Hamilton managed to take the lead and pitted on the next lap to put on ultra soft slick tyres, which would see him till the end of the race.

Ricciardo came back in after one lap to change to slicks and came back out behind Lewis, it was obvious he was faster than him, but as is the nature of the track he could not pass, he hounded Lewis from lap 38 to the end of the race behind the Brit.

On Lap 34 Kevin Magnussen and Max Verstappen went out on lap 36, he had a weekend which I am sure he will want to forget. Over the weekend he did serious damage to his car three times, he maybe a brilliant driver but young rookie mistakes come out now and again.

Filipe Nasr and team mate Marcus Ericsson will have been on the naughty step after this race. Team orders were issued to Nasr in lap 50 to pull over for Marcus who seemed to ignore them. Ericsson made a made dive going into a corner damaging both cars – not a good idea. Nasr pitted and came out again but retired on lap 52 saying there was smoke in the cockpit.

Both McLaren drivers had a good race with Fernando Alonso having his best race for a long time finishing fifth and his team mate Jenson Button also ended up in the points.