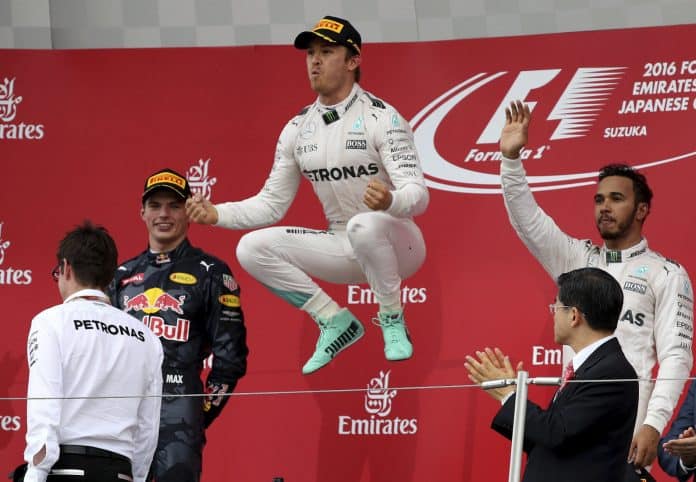 Has the season come to an end for Lewis Hamilton? We here at Betotg think he has a huge mountain to climb. The race in Malaysia where he was in a commanding lead resulted with a blown engine. It’s left the British driver feeling he cannot beat the bad luck he has faced during this season.

Here in Japan it looked as if he is still down. His body language says to us he has lost his drive and it showed at the start of the race when the current world-champion had another terrible start dropping down to eight place. Unlike the old Lewis he did not attack the drivers who had passed him for quite a few laps, even the way he was driving was like someone who had given up. When he did seem to finally get going and was in a fight for second place on the final lap, he had to settle for third as Max Verstappen was in no mood to let him pass.

So where does that leave Hamilton’s chances of taking the title. Well at 33 points behind his teammate and with only four races left it means Rosberg only needs to come second in every race to be world champion. Even if Lewis wins them all he has to pray that Nico has a failure in one of the last four races. So as we have said we think it is over for him.

Nico Rosberg is on a high after a text-book and did not seem to have any problems in the race. It’s the Germans first win at Suzuka and should be the first step to see him number one next year.

For the second race in a row young driver Max Verstappen crossed the chequered flag in second place. We have said before this nineteen year old is already showing the same trait as Michael Schumacher and we can see him going far given a competitive car.

The Ferrari drivers Sebastian Vettel and Kimi Raikkonen hoped to have a good result here in Suzuka due to the Ferrari’s big following in the far east. But neither driver could get up to the front-runners and had to settle for 4th and 5th place.

Jenson Button in his last season started 22nd on the grid and finished a disappointing 18th, not a great day for Honda on home turf. Fernando Alonso did little better coming home in 16th position and very frustrated.

Daniel Ricciardo winner of the race in Malaysia could not get it together in Japan, unlike Max his teammate who took second place Daniel only managed 6th.

The next race is in America on 21-23 October. We think it’s time to take a chance on those outside bets, the top teams are coming closer together and it will only take a bad pit stop for Red Bull or Ferrari to take advantage.