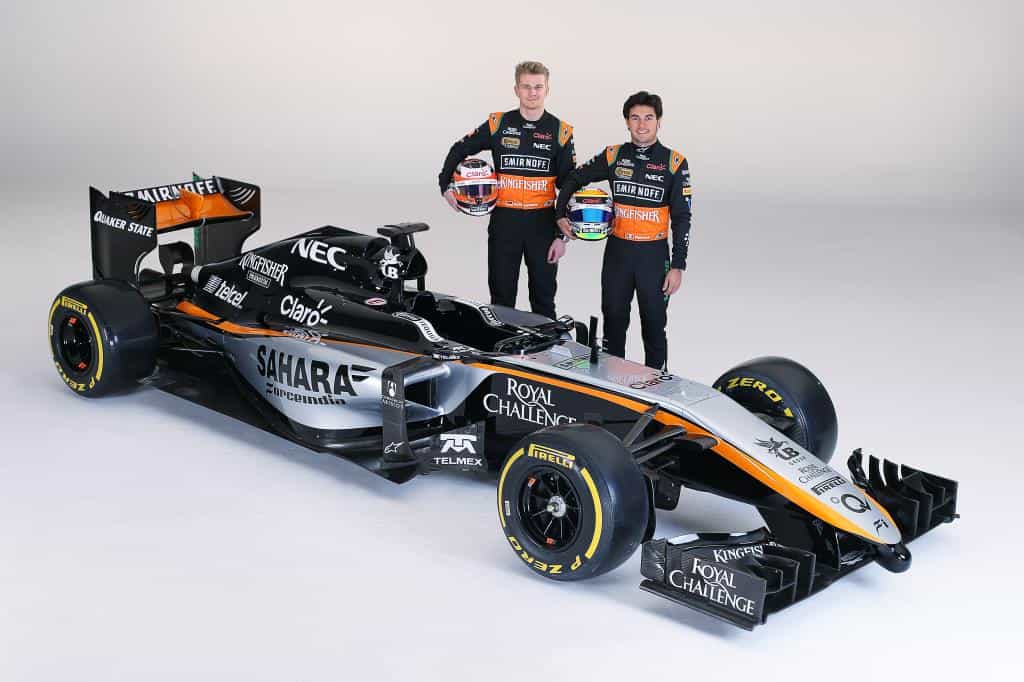 The Force India F1 team launched a new team livery on their previous years car to pundits in New Mexico. The new 2015 car (VJM08) will not run during the first week of pre-season testing which starts in Jerez on 1st February, instead they will run a modified 2014 car, we’ll have to wait until the second pre-season testing in Barcelona which runs from 19th-22nd February before we can see the new aerodynamics package of the 2015 car.

Following the unveiling, Technical Director Andrew Green highlighted some of the changes that will come to the new 2015 car, most noticeably will be the front-end

“It is a redesign that involved a lot of work over the winter, as the new regulations caused a loss in terms of down-force and we’ve been working to claw back all that performance.”

In addition to the new aerodynamics, the VJM08 will be powered by a Mercedes engine (the same engine manufacturer that took Lewis Hamilton to win the 2014 championship), so with improvements to both engine and chassis Force India’s boss Vijay Mallya was quite confident and looking forward to the season ahead, Mallya said: “We have two exceptional drivers who will hopefully steer the challenger to the front of the grid and a few podiums during the year.”

The team do in fact have two great young talented drivers in Mexican Sergio Perez and German Nico Hulkenberg, both of which have proven in previous seasons their ability behind the wheel and have beaten off still competition to retain their drives for this year. But last season proved difficult to keep up with the likes of Mercedes and Red Bull and the team only achieved one podium place. Hopefully with a competitive engine and revised aero they can compete with the top teams.

BetOTG will continue to provide you all the latest news from the world of Formula 1.

It can be frustrating when you’ve nailed it on a football bet, but for one reason or another you cannot access your winnings immediately. If...

Revolut Gambling | All you Need to Know

DraftKings Gift Cards | All you Need to Know 💳