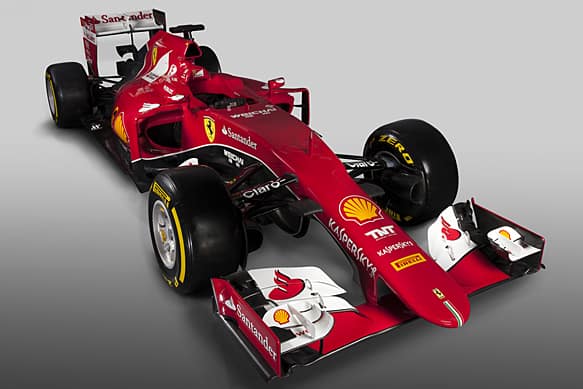 Ferrari unveiled the eagerly anticipated SF15-T from their headquarters in Maranello, which they hope will see the team return to winning ways. The team failed to win a single race last year which resulted in both of their drivers being very critical about the performance of the 2014 car and the inevitable exit of double world champion Fernando Alonso from the team.

Following last years poor season saw a complete restructuring of management, with Sergio Marchionne replacing Luca Cordero di Montezemolo as president and Maurizio Arrivabene as team principal. Ferrari have a steep hill to climb as there was a noticeable lack of horse power in the Ferrari engine compared to the performance of the Mercedes hybrid power train engine which saw Mercedes team win all but three races last year.

The SF15-T will be the first car to be fully designed by Technical Director James Allison. During the unveiling he highlighted the areas of improvement the team have made to the 2015 car:

“Last year, we had an unacceptably large gap in our performance and we have tried to ensure the weaknesses on the ’14 car were put right.”

The longer front nose and tight rear body look very similar to that of the new McLaren-Honda so to conform to the new FIA 2015 F1 regulations. Allison also emphasized on the amount to attention spent to the power unit of the Ferrari engine and ERS (energy-recovery system), saying that the engines raw performance has been improved which he hopes will narrow the gap to the leading Mercedes engine.

The team has an all-star line up of drivers in world champion Kimi Raikkonen and four-times world champion Sebastian Vettel who replaces Fernando Alonso as their number 1 driver.

With a complete re-structuring of the team and two of th best driver in the sport, Ferrari could have a good title chance this year, it’s all really down to how much ground-work has been made on engine performance.