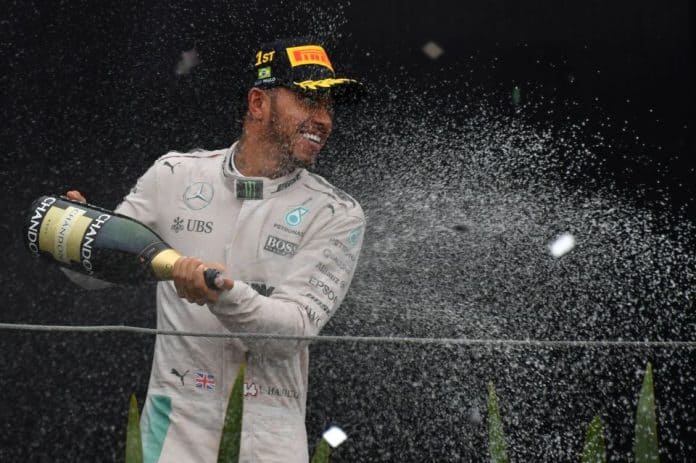 Where do we at Betotg start with the penultimate race in Brazil? First we have the atrocious weather which saw the first seven laps run behind the safety car. We had two red flags and a further 3 virtual/safety cars, it was a question of should it have been run at all.

The Haas driver Romain Grosjean didn’t even see the start after getting a brilliant seventh place on the grid. The French driver spun off the track and never made to the grid. Both Ferrari drivers also crashed out and even F1 hot-property in Max Verstappen had a nasty spin on the main straight but fortunate to recover.

Hamilton did again what was required, he drove from start to finish with a perfect race in terrible conditions. Nico Rosberg also kept his challenge alive by coming second, the German goes into the final race twelve points ahead and only needs a third place in Abu Dhabi to clinch the world title.

We said in our preview that young Max Verstappen could be the one to put the spanner in Rosberg’s works and almost did when for a while he was in second place behind Lewis. At times the Dutchman looked like he may even have challenged for the lead, but unlucky for him a wrong choice of tyres saw him come into the pits and change from inters to full wet. It brought him back out in sixteenth position with ten laps to go. From then he drove an exceptional race passing one driver after another to come across the finish line in third. He also had the fastest lap, a truly unbelievable driver and one to watch next season.

Another driver who never saw the finish was Felipe Massa. This was his final home GP and the Brazilian fans gave him a well deserved farewell. The veteran even had the teams lining up to applaud him as he walked back to his garage. We have said before one of the true gents of F1 and will be missed.

It’s nice to see that Jolyon Palmer will still be racing next season. It did look for a while that he had lost his seat at Renault, but he has been confirmed for 2017 in the same seat.

So what about the final race in the season Abu Dhabi? Well the Mercedes drivers will want to be careful how they go and will not want to take chances that see their cars damaged or out of the race. So this is where Max Verstappen will take a chance to get another win this year, he has nothing to lose and will take chances the Mercedes boys won’t. Now could be the time to get a bet on him.