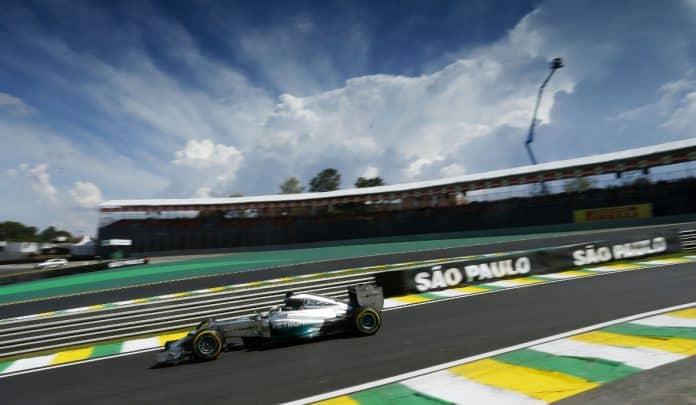 In this weeks Brazilian GP 2016 F1 Betting Tips Betotg’s own Formula 1 addict and piston-head analyse’s Nico Rosberg’s chance of taking the title and becoming only the second father-son driver champions in the history of the sport.

With only two races left and 19 points between the top two, Rosberg only needs to finish in second place for each race so it’s the German drivers championship to lose. Lewis Hamilton has done everything in his powers to keep this title fight alive by winning back-to-back races, but Nico has equally ensured the points defecit is kept to a minimum by stating just behind the Brit in second. Hamilton will be desperate for Nico to have either a poor start or car problems in Brazil GP. But it’s a big ask given the reliability of the Merc and Nico’s conistancy throughout the season.

The other card in Lewis’s poker hand comes from the boys from Red Bull. The Milton Keynes team have been closing in on mighty Merc all season and we can see them being the ones to give the championship contenders problems in Brazil.

History doesn’t favor Lewis Hamilton who has never won at his hero (Ayrton Senna’s) home race. In fact Lewis has struggled at Interlagos where he lost out on the title race in 2007 and narrowly won the WDC the following year but crossing the line in fifth place. In contrast Nico Rosberg has won twice in 2014 and 2015 and looks in a strong position to make it a hat-trick.

If Rosberg wins the title on Nov 13th it will be a fitting result for a driver that has faced serious adversity driving against what is arguably one of the sports greatest drivers in Hamilton.

So aside from the front two Max Verstappen is our choice to give us an exciting racing. In the last two races alone the talented young driver has come in for a lot of stick from the other drivers (especially Sebastian Vettel) who seems to have some sort of grudge with Max.

Verstappen has consistently kept the Mercedes drivers on their toes for most of the season. If Lewis ends up having a poor race, Nico will be very cautious and not want to take any risks which could put the young Red Bull driver in an advantageous position to take the chequered flag.

So what do we expect in the next race in Brazil, well we expect Lewis to keep the pressure on Nico and both Red Bull drivers to split the Mercs. Ferrari are clearly under performing but Vettel can get 120% ut of the prancing horse and if it rain in Sao Paulo we could see both Kimi and Seb on a different strategy

Well as far as a placing a bet goes it’s hard to ignore Hamilton who should be decent odds given he hasn’t won here. Should they collide we tip Verstappen to take the win. Outside of that Bottas has a history of getting a good result as well as Massa so a podium fish for either is a possibility.

The Brazilan GP is Live only on Sky Sports F1 from 4pm with highlights on Channel 4.