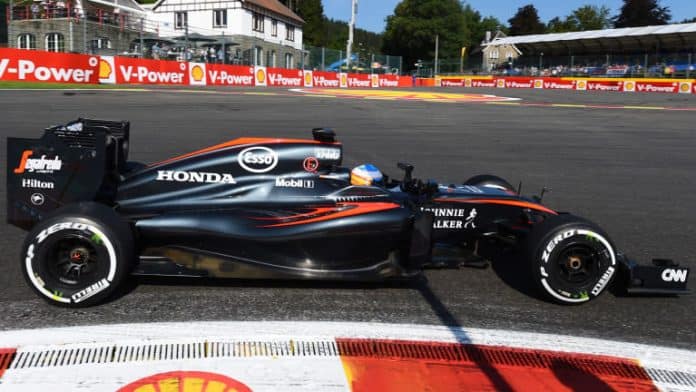 We return to F1 here in Belgium this weekend after the summer break, it seems to us that four weeks is a bit long to be away from the track at a time when F1 is losing a lot of its fans already, but it seems the powers at the top think it does no harm, we would disagree when you see empty stands on some circuits this year.

Coming away from Germany Lewis will again be looking to extend his lead over his team-mate Nico, he drove the perfect race from start to finish in 2015, and we think he will do it again this weekend, he will of course have other teams, plus his team-mate who will try their best to stop him, but our money is on Lewis.

Nico Rosberg did not get off the line well, he was swamped either side by Sergio Perez and Daniel Ricciardo, Perez was pleased with his quick get away and tried to pass Lewis at Eau Rouge, but it was futile as Lewis out-braked him, Nico was left

Struggling in fourth will Vettel, Bottas, Massa, Grosjean, close behind, he took second place after coming out of the pits on lap 12, but he had to do a bit of close racing with Perez to take the place, we think he will do better this weekend.

Daniel Ricciardo running in fifth was unlucky for his Red Bull car to expire, this brought the Virtual Safety car out, Rosberg was now running 3 seconds Behind

Hamilton, Grosjean who had qualified forth, but started ninth after a penalty, went on to pass a flagging Perez, he used the VSC to dive into the pits for new rubber, it was well-timed and he crossed the line in third place, he is also a good outside bet for this weekend.

Sebastian Vettel tried to run his tyres to the end of the race, but the penultimate lap seen one of his rear tyres blow, he was lucky to control the car, but it was race over

Valtteri Bottas had a poor start to his race when at the first pit-stop the team put a different tyre on one of his rears, result a drive through penalty, would not liked to be the pit-man who did that, still he did get a reasonable ninth place, he has not been as good recently, but when on form can run a good race.

Fernando Alonso, and Jenson Button 13th and 14th last year, are expected to do better this weekend, their car has improved this year, and though there is not much chance of a podium finish, I expect to see them picking up points for McLaren.

We see the weekend as a one two for the Mercedes boys, but we always like to see a good outside bet, Max Verstappen driving for Toro Rosso last season had an 8 th place finish, driving this season for Red Bull he has been a class act, and will be up with the front-runners on Sunday, he has already won a race this year, and we think he could do it again before the season ends.

Sebastian Vettel will have learned from last year and will respect the wear on his tyres, he tried to take too many laps on them and paid the price, another hungry driver who wants to be on the top step, one to watch.

Kimi Raikkonen team-mate of Vettel, is another driver on the right day will give his best, he tends to be great at one track and bad at another, 7 th here last year, might do better but we don’t know, if he is on form, he can beat the best.

So there we have it, get a bet on one of the best drivers we think could make you a good few quid on, or stick to the favourites, the choice is yours good luck.