BetOTG | Bet On The Go!
Home Sport News Football Weekend Football – 2nd place in EPL is still up for grabs 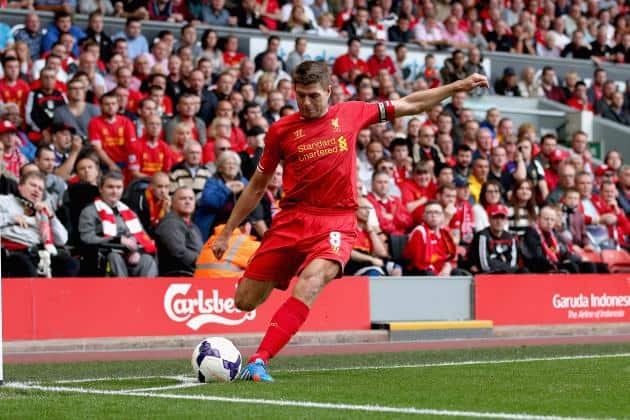 Make sure you don’t miss what will be Steven Gerrard’s 709th and final appearance as Liverpool play Crystal Palace at Anfield today. It’s the end of an era that saw the likes of Jamie Carragher and Robbie Fowler, home-grown talent, being brought up through the ranks at Anfield, to play at the pinnacle of the sport having won almost every trophy but the league title. It will be interesting to see how Liverpool will cope without their skipper who has been instrumental to their success for the past seventeen years.

The Pick of the Week of this weekends games has to be the clash between old rivals Man United v Arsenal at Old Trafford (16:00). A win for Wenger’s side would almost certainly cement Arsenal to automatic qualification to the champions league. But 3rd place in the league is certainly no fore-gone conclusion following Arsenal’s defeat to Swansea on Monday. But the Gunners are not the only side guilty of dropping points this season to lower league sides as all top-four teams have done the same including Chelsea.

Danny Wellbeck should be fit to play against his old side. Arsenal will be without Debuchy who is out with a hamstring injury. Man United will be without midfielder’s Di Maria who suffered a knocked and Michael Carrick who has a calf muscle strain.

They need to be careful on the counter as United’s back four aren’t as confident and disciplined as previously.

Swansea v Man City is the other early (13:30) kick-off game. City who have had a pretty good run of form of late will want to secure 2nd spot in the league but can Swansea take another top-flight scalp this season and keep second place open until the final weekend, you’d be a brave man to bet against Man City!

Fancy having a bet on the Arsenal v Man United game? Well you can bet odds on Arsenal win come full-time with odds of 19/10. Or if you think United will have the upper hand with and to come from behind to win.