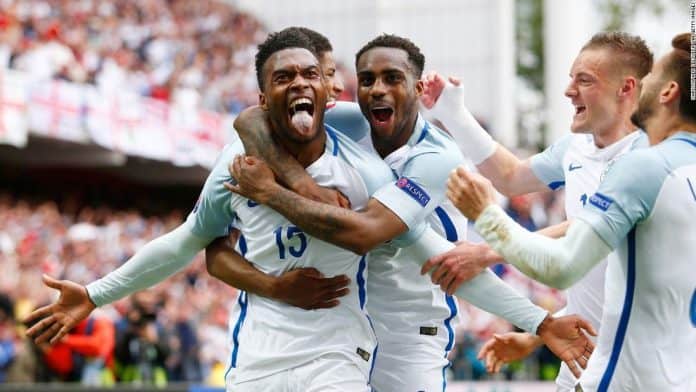 It was yet another nail-biting match for England fans against Wales which saw Roy stick to his guns and pick the same line-up he had chosen in the first game. The occasion may have got to some of the younger players with Sterling losing faith in the final third and Deli Alli not playing with the confidence and fluid movement we’re use to seeing this season at Spurs.

England dominated the game from the get go and had more possession and chances in the first half but couldn’t convert them. The first goal came just before the break when England gave a foolish free-kick which Gareth Bale took full advantage of and gave the Welsh the lead.

Given the number of chances England had without scoring it may have looked like the obvious choice to bring on the Premier League player of the Year (Vardy) along with Rashford and Sturridge but it was still no less a brave one.

As soon as Vardy and Sturridge came on England upped the tempo further and their chance came when Vardy poached a goal from a cross which was headed back by Ashley Williams. Sturridge’s goal was incredible and he made the goal out of nothing but sheer willingness by pulling defenders out of position to allow him to run into that space and continue forward to slot a low inside shot that deflected in off the keeper.

Slovakia may be a one-man-team but what a player they have in Marek Hamsik. Two late goals in the first half from Vladimir Weiss and an insane volley from Hamisk gave Slovakia a comfortable lead going into the break.

In the second half Russia got back into the game and in the 80th minute Denis Glushakov headed in a late goal, but they were unable to level the gave and it leaves Russia with one point in 2 games and looking very unlikely to qualify.

Slovakia go into this game knowing that nothing but a win over England would see them through to the knock-out stages of Euro 2016 and on their current run of form with just one loss in ten matches it’s no longer an outside bet.

England’s 20 attempts at goal with only 4 of them were on target shows their inability to finish teams off and more startling is the fact that in 11 games England have never beat a side by more than one goal.

It’s likely we’ll see the same side that’s started in the last two games with Sterling possibly replaced for Rashford. The opportunity to top Group B is there for England and puts them in a great place to progress into the knockout stages. I’d still like to see both Sturridge and Vardy come on later in the game as impact players but you can run the risk of running out of time if you’re a goal down.

Given the way England have dominated possession in both games there’s no reason why they can’t win this one comfortably and a win for England over 2.5 goals is a decent bet for anyone to place.