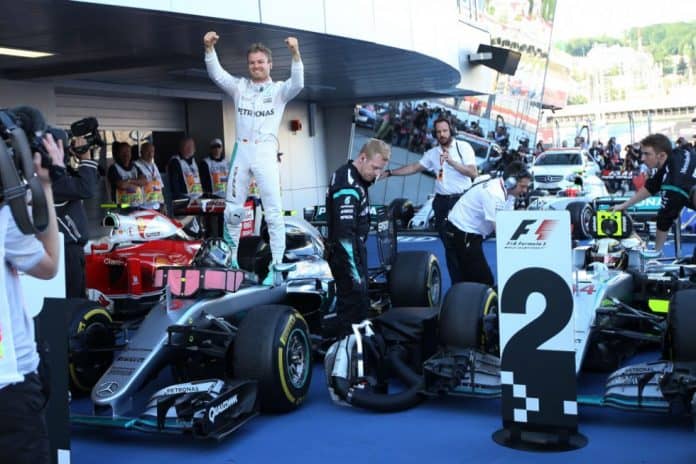 Sochi was another race where Lewis Hamilton was demoted down the grid due to car problems. He seems to be getting more than his fair share of bad luck but still did a startling job to move quickly through the field and minimised the points gap deficit he has on Rosberg. Even though he again had warnings about his car in the closing laps he still came home second a very good drive, let’s hope the car problems are behind him.

What can we say about Sebastian Vettel, he had a run in with Daniil Kvyat in China and  blamed him for aggressive driving. So Kvyat thought he could make it up to Sebastian by running into the back of him, not once but twice in the first lap. Sebastian made a few comments which required a few beeps. We felt he was not at all impressed and had a few words with Kvyat’s boss Christian Horner.

McLaren look like they have stepped-up their game with both Jenson Button and Fernando Alonso picking up points. It’s great to see both world-class drivers moving back up the field, it has been a tough time for all involved at McLaren-Honda and hopefully they’ll continue with this level of performance throughout the year.

Valtteri Bottas has started to show the form he has shown in the past seasons, taking second on the grid and finishing fourth. We’re big fans of Felipe Massa and it was great to see the Brazilian driver start and finish a very respectable fifth, which has been a long time coming for Williams.

Compared to his team-mate Kimi Raikkonen has been a “rock” for Ferrari so far this season. Given Vettel’s irregular results this season Kimi keep has been the backbone of the team and providing vital points for Ferrari in the championship.

Daniil Kvyat still managed to finish the race in fifteenth (even with a ten second stop and go penalty) after hitting Sebastian twice. After such a good start to the season, some rookie mistakes have been coming in to his driving and as a result Red Bull have replaced him with Max Verstappen from the sister team Toro Rosso.

Renault picked up their first points of the season thanks to a masterclass from Kevin Magnussen who started seventeenth on the grid and came home in seventh place, a good result for the team since their return to F1.

Another great drive came from Roman Grosjean who started in fifteenth on the grid and had another fine race to finish eighth, which was a solid drive for the Haas driver.

Daniel Ricciardo had his chance of any points ruined by being stacked behind his team-mate who was being fitted with a new nose cone. By the time his turn came it was impossible for him to recover.