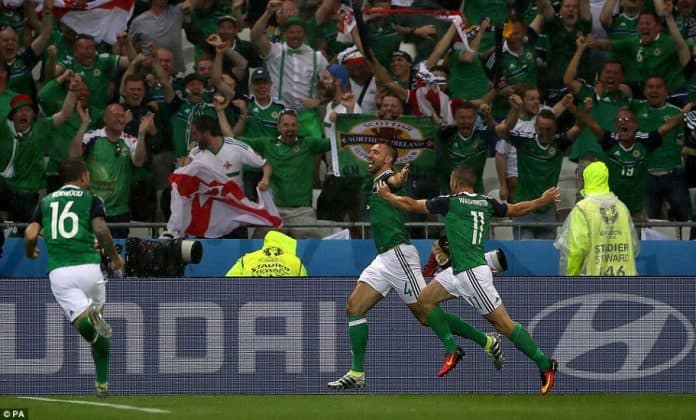 Martin O’Neill is no stranger to making bold and brave choices, but The Northern Ireland managers decision to change the formation and five changes in players from the defeat they endured in against Poland certainly raised a few eyebrows.

The first half was all about Northern Ireland probing and asking questions of Ukraine’s defense. The Green Army dominated possession throughout (69%) but ended the first half in frustration as Ukraine’s back-four were just too good form them.

Northern Ireland drew first blood just after the break when Oliver Norwood delivered a brilliant free-kick which defender Gareth McAuley headed across goal to give them the lead.

Ukraine had a great chance to equalise when Seleznyov exploited a cracking free kick and hammered in a header straight at NI goalkeeper, it almost went over the line but Michael McGovern was there in just the right place at the right time.

Niall McGinn finished Ukraine off when he capitalised on a rebound to give Northern Ireland a comfortable lead. The build-up before the goal was fantastic and they managed to keep their composure throughout.

Germany took the first goal-less draw of the European championship against Poland and puts the 2014 World Cup winners in automatic qualification and a strong position to top the group.

It was clear neither side wanted to give anything away with the first half ending without a single shot on target. Mario Gomez had the only real opportunity in the second half but was denied by the keeper.

Northern Ireland can’t afford to sit back in this game and hope a draw will see them through as if Poland beat Ukraine it’s certain both Poland and Germany will go through. However if Ukraine beat Poland and Northern Ireland draw they will qualify for the knockout stages.

I’ve got a feeling O’Neill will make a couple of changes to the side that beat Ukraine just to keep Lowe on his toes. Germany look to be firing blanks at the moment with neither striker on form so at least a draw looks a possible outcome.

The German’s are master tactician’s in possession play and grinding sides down so Northern Ireland need to play in the same high tempo pace they played against Ukraine to stand a chance.