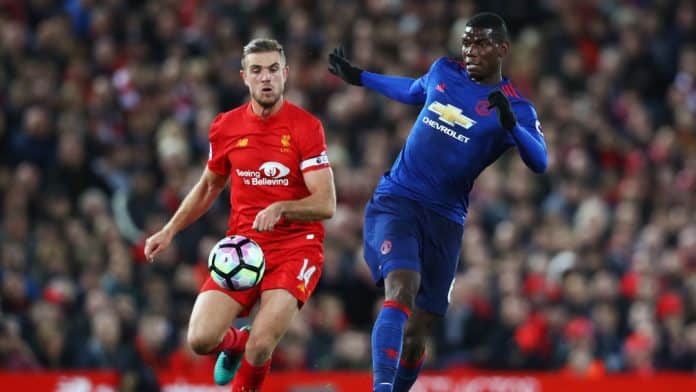 In this weekends Liverpool v Manchester United betting tips 14/10/2017 we assess both side run of form since the start of the season and give you our best shot of maximising your returns.

So after the long winded international break, the restart of the English Premier League couldn’t ask for a better early afternoon start with Liverpool hosting Man United at Anfield.

Jose Mourinho second season at United could not have gotten off to a better start, with his side going undefeated in his last seven matches and an incredible 21 goals scored to date. That comes to an impressive 3.00 average goals per game and an 86% chance of over 1.5 goals. It’s no wonder that the red-side of Manchester are all smiles again after a torrid past few years since Sir Alex Fergerson’s departure.

Last meeting resulted in a 1-1 draw where neither side wanting to take a risk and finish the game off.

In contrast Liverpool appeared to have a decent start to the season. But a couple of draws to recently promoted Newcastle and Burnley have certainly dampened their title challenge. Liverpool who were renowned to have a solid back-four now look a soft target and the stats speak for themselves. The Reds have hemorrhage a total of 20 goals in just 12 games this season.

It’s easy to see why with the likes of Lovern, Clyne, Moreno and Gomez who are far from world-class. Klopp knew he needed to address this issue during the summer but failed to find any decent center-backs.

To add insult to injury, Liverpool’s key striker Sadio Mane has now been ruled out for up to six weeks with a hamstring injury picked up during international duty. This will only compound the issue for Liverpool and put pressure on the likes of Countinho and Firmino to pick up the slack.

Lukaku has been a revelation

It’s fair to say that the news that United had signed Lukaku raised a few eyebrows, but with the departure of talisman Rooney, the Belgian forward has stepped up to the plate and delivered a cracking 10 goals in 9 matches.

Odds of over 2.5 goals look very strong in Man United’s favour as well as scoring in both halves. It’s really hard to see where Liverpool can get into this game, Countinho on his day can pull-out a worldy but apart from the Brazilian it’s tough to see where the goals will come from.

Klopp may have to resort to sitting his team deep and wait for the handful of opportunities that may arise on the counter. But personally I see United completely dominating this game and walking away from Anfield with 3 points.