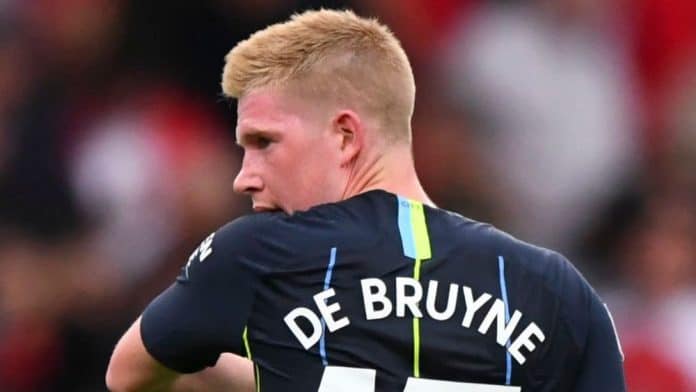 Thoughts of Manchester City facing a tougher start to the season with midfielder Kevin De Bruyne sidelined for three months were quashed on the weekend, when City demolished Huddersfield town 6-1.

De Bruyne suffered a knee injury during training last week following a vital 2-0 victory over Arsenal in their opening game of the season. Although the Belgian does not require any surgery he will be on the bench for at least three months

The Belgium international was arguably one of the best players in the EPL last season and instrumental in Manchester City lifting the Premier League title. Pep was cautious about their prospects without him.

“He will be a big miss. We are going to do our best without him and try to be there by the time he returns.” – Pep Guardiola

Even with De Bruyne out until xmas Pep Guardiola has some formidable reserves at his disposal, with the likes of Raheem Sterling, Riyad Mahrez and Leroy Sané ready in the sideline.

Riyad Mahrez who signed from Leicester City for a club record £60M deal in the summer has come on for both games for City. Mahrez already looks settled within the team and almost scored on his debut against Arsenal from a free-kick but was saved by Petr Cech.

Not to be out-done by City’s new-boy Raheem Sterling put Manchester City ahead in the opening game against Arsenal, smashing a belting 20 yard shot which cut through two defenders.

When asked whether De Bruyne’s injury would give Liverpool an advantage, Jurgen Klopp dismissed the idea and went on to say that given Manchester city’s depth of squad, it would not derail them one bit.

Klopp appears to have been proven right following the result at Huddersfield but it’s too early to say just how much of an impact it could play. Liverpool currently sit second in the table on equal point with City.