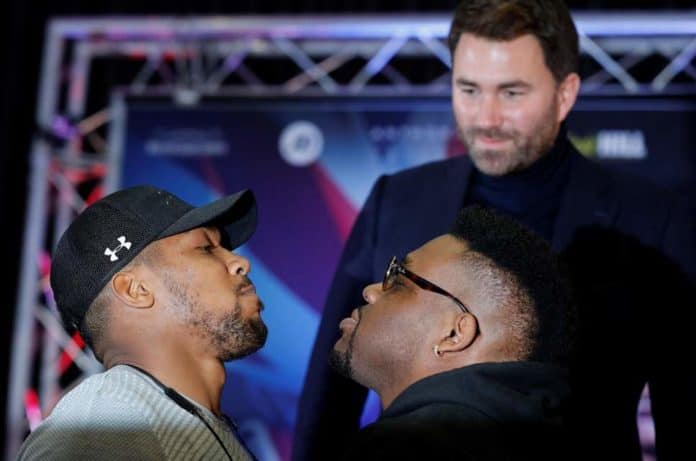 With just over a month to go until Anthony Joshua heads state-side to face the formidable Jarrell Miller, the fight has been called-off after Miller failed a routine drugs test.

The American was supposed to face Joshua on 1st June at the iconic Madison Square Garden, but was denied a NY licence after a sample taken on 20th March was found to have an “adverse finding.”

The second sample showed traces of GW1516, a banned substance in boxing as it can enhance endurance and power.

Following the news Miller went onto Instagram and apologised to fans, admitting he “messed up”, he said;

“I messed up a big opportunity and I’m hurting on the inside. My heart is bleeding right now – I hurt my family, my friends, my team and my supporters.”

“But I am owning up to it. I’m going to deal with it and come back better and I’m humbled by the experience.”

It has also been reported that a human growth hormone which aids muscle build and workout recovery was also found during the second test.

Anthony Joshua who currently holds the WBO, WBA and British IBF heavyweight belts will now seek to find a replacement.

Some boxing names that have already been suggested include: Michael Hunter, Poland’s Adam Kownacki and Cuban Luis Ortiz. Eddie Hearn has said that a new opponent will be announced next week.

This will be Joshua’s debut fight in America in an attempt to promote the raise the profile of the British fighter before the possible face-off with Deontay Wilder later this year.

Wilder currently holds the WBC title, which is the last belt that Joshua needs to be classified as undisputed heavy-weight champion.