With just over 24 hours to go, for this Joshua v Takam betting tips 2017 we take a look at Joshua’s stand-in opponent stats and give you our opinion of how the fight may play out, as well as some decent value odds.

Ever since Anthony Joshua ended the career of Wladimir Klitschko in one of the best heavyweight fights for a decade. The North-Londoners profile has gone into the stratosphere, with talk of a final unification fight with American Deontay Wilder who holds the WBC. 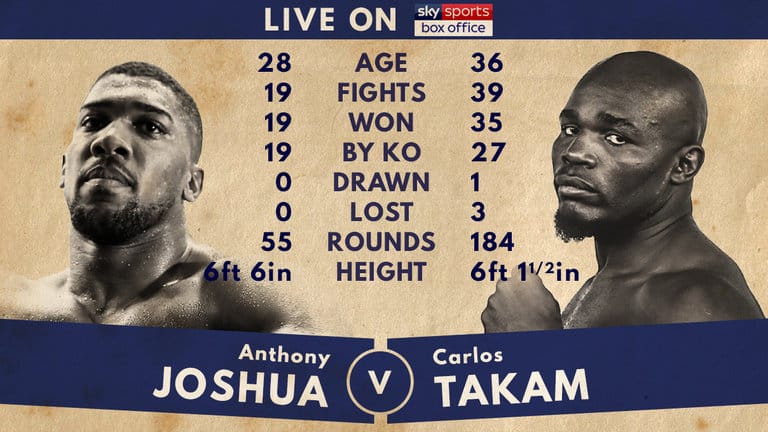 But both Joshua and his promoter Eddie Hearn are in no rush to go state-side and have suggested a fight with Wilder could be on the cards in late 2018. Until then Joshua has a few “pay-day” fights scheduled with some second-rate boxers past their prime.

Joshua had planned to fight the Bulgarian Kubrat Pulev who has a pretty decent career of 25 KO’s and only one loss to Klitschko back in Nov 2014. But the Bulgarian has to pull-out of the this fight due to a hamstring injury. With less than 3 weeks to go in steps Carlos Takam who was scheduled to be Anthony’s next opponent in early 2018.

AJ writing his own history

With Klitschko now heading for retirement and it’s unlikely we’ll ever see Tyson Fury back in the ring after the Mancunian declined to register for his UK boxing licence last month, there are very few strong opponents who can stop Joshua from dominating boxing for a decade.

Chinks in the champs Armour

What stood out from Joshua’s previous fight against Klitschko was that the Londoner was caught out a number of times by a boxer way past his prime. A turning point in the fight came in the sixth when Wlad dropped Joshua on the canvas, with a full body shot to the chin.

To be fair to Anthony is was the first time he had to pull himself off the canvas after a heavy blow from a top fighter and he took it well. But it suggests that the champ has some weaknesses to his game-plan and a younger opponent with similar ability could cause Joshua some trouble.

Could an upset be on the cards

Anyone who think that this fight is a walk-in-the-park for Joshua hasn’t paid attention to Takam’s scorecard. Apart from an defeat early on in his career, the Cameroonian born boxer has only lost to Povetkin and Parker in recent years, so he’s definitely no push over.

If Takam has any chance of winning this fight it has to be during the early rounds. I’m sure the he will come of of his corner and give it everything he has to try and put Joshua off-guard. Takam likes to get close-in which is the opposite of Joshua’s style so expect the start to be chaotic.

This is clearly Joshua’s to lose and provided Eddie Hearn has done his homework, Joshua should comfortably beat the French-Cameroonian.

With that said Joshua will likely beat Takam later in the fight (between seventh and ninth round), but the Brit needs to keep his head if the Frenchman causes an upset in the early round.