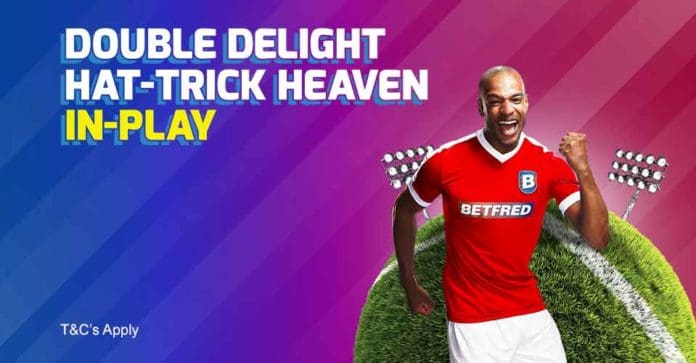 It seem like bookmakers have taken note of the huge success both Paddy and Bet365 have had with their 2UP promotions.

So they’ve come up with their own tantalising offer for you lucky punters.

But Betfred has taken a different approach with a unique offer that knows the socks off 2UP.

In this article we’ll explain what Betfred Double Delight Hat Trick Heaven is and how you can take advantage of this deal.

We’ll also guide you on how to place your first DDHH bet.

Finally we’ll highlight some of the key terms as part of the promotion, so there shouldn’t be anything to catch you out.

So what is Double Delight Hat-Trick Heaven?

Harry Kane is the first goal-scorer of the game and your FGS bet at odds of 4/1 comes off – Happy days.

Later in the game Kane bags another one, now your odds have doubled to 8/1!

But wait there’s more to come…

He nets in a third and now the England forward has score a hat-trick so now your odds have tripled to 12/1 or 13 decimal and your dancing round the house!

This sounds great, so how do I get started?

Well the first thing you will need (if you don’t have one already) is to open a Betfred account.

Right now Betfred has a cracking offer to triple your first deposit with Bet £10 Get £30 in free bets.

This offers is for 18+ new customers only. Be sure to read the terms above before joining – for a full list checkout Betfred’s T&C’s

Registration should take less than 5 mins, after that you’re up and running!

The process is really straight-forward.

First thing you’ll need to do is place a first goal scorer pre-match single bet on any of the specific Double Delight Hat-Trick Heaven games.

A full list of games can be found on the DDHH Promotions page.

Following that the odds will automatically update if your chosen scorer qualifies by scoring more than one goal.

What matches are available for Double Delight Hat-Trick Heaven?

If you check out Betfred’s DDHH promotions page, you’ll find a list of all of the games available.

In general most of the major UK football games will be included, such as English Premier League and Championship League, Scottish Premiership, European competitions and International games.

But wait, Betfred has raised the bar even further!

Due to the huge success of this promotion, Double Delight Hat Trick Heaven is also available on in-play markets.

With DDHH In-Play you get all the same promotional benefits while the game is active.

Some of the terms have changed slightly so make sure you check all of the terms for Double Delight Hat-Trick Heaven In-Play before you place a bet. 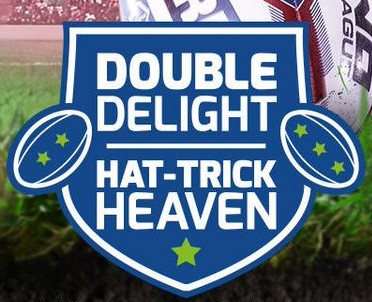 And it’s not just football fans that can take advantage of this incredible deal.

Betfred has recently opened it up to rugby fans with Super League Double Delight Hat-Trick Heaven.

Just as the football promotion, Super League punters can also get double and triple the odds on the first try-scorer.

Some of the terms and conditions have changed slightly so be sure to check these before betting.

Betfred have clearly tried to differentiate themselves from the rest of the herd.

Although it may not draw as much attention as 2UP, Double Delight Hat Trick Heaven can be more lucrative offer for punters to exploit.

But I would strongly suggest you only use this promotion if first goal-scorer bets are already part of your long-term winning strategy. FGS bets are not for the faint hearted due as you are your more likely to lose your shirt than come out on top.

Overall Betfred DDHH offers punters something unique with real value and if you were planning on placing a FGS bet, then this is the cherry on the cake if it comes off.