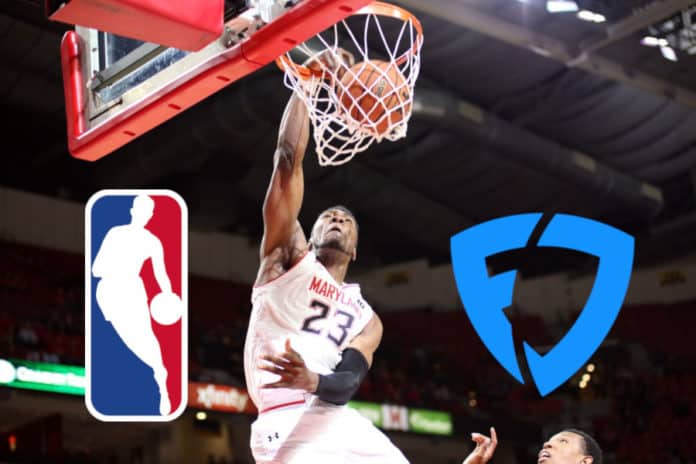 Following the US Supreme Courts decision back in May to allow any state to apply for a sports betting licence, we’ve seen a flurry of partnerships and deals between some big-players being made.

The latest being a “strengthening of partnership” that already exists between FanDuel and the NBA (National Basketball Association).

The NBA and FanDuel have agreed on a multi-year partnership, that will make FanDuel the US national basketball league their official sports betting operator.

For anyone unfamiliar with FanDuel they’re a fantasy sports provider who was acquired by Paddy Power Betfair PLC back in May and is the leading sportsbook in the United States.

New opportunities to engage with fans

Under the terms of the partnership FanDuel will have exclusive rights to use official NBA logos and trademarks on their sportsbook platform as well as provide the NBA analytical betting data during live broadcasting.

“The core of our partnership with FanDuel has always been focused on innovation around the experience with fans. We’re excited to extend it to include sports betting.”

FanDuel Group CEO, Matt King was equally excited by the extended partnership and highlighted the great opportunity ahead for both companies, he said:

“The NBA was the first sports league we partnered with and has been an incredible partner ever since. We share a clear view on how we can collaborate to bring basketball fans new ways to engage with the players they love.”

“With the expansion of our fantasy deal and addition of sports betting, we’re excited to work together in ways we haven’t before.”

This is nothing new for FanDuel, who has worked closely with the NBA as their official Fantasy Partner since 2014 and extended this further in 2017 when they also became partners in the women’s NBA league.

But believe me, this is just the beginning!

I think its just a matter of time before the whole of the US opens its doors to the sports betting industry.

As the US gradually opens it’s doors to the gambling industry, with each state granting approval, we’re likely to see deals being done between well-established bookmakers and sporting leagues such as the NFL and MBL.

There are currently 8 states that have given the nod to legalising sports betting, which includes the likes of New Jersey, Mississippi, West Virginia and New Mexico. The infograph above highlights all of those states that have already been granted approval, and those that are still pending.

As you can see approvals and pending applications now account for over half of all US states, with more states reviewing their position.

As Bob Dylan once eloquently wrote – Times they are a changing..