BetOTG | Bet On The Go!
Home Academy Matched Betting VPN when Betting Aboard – Stay Under the Radar 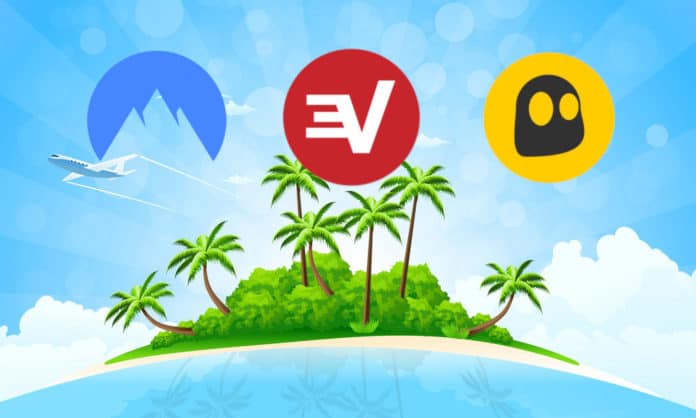 If you’ve been matched betting for a while now you know just how lucrative it can be. Even ten pound a day which is relatively straight-forward to make can return a decent monthly earning.

So the last thing you need is any down-time while your away on holiday.

The problem is that most bookmakers will not allow punters to gamble abroad, even if your a UK resident! We’ll come back to the reasons why later on…

In this article we’re going to explain how using a Virtual Private Network (VPN) can help get around betting aboard.

It’s not as technical as it sounds believe me!

We’ll also explain why not all VPN’s are created equal, and how bookmakers can tell if you’re using them and ways of getting round this.

Finally we’ll give you our 5 “Super-Stealth” Matched Betting VPN’s by our very own IP security expert, so you can stay under the radar for longer.

It happens to all great matched bettors eventually…

You finally pull yourself away from the latest Call of Duty and start your matched betting journey.

Within a three months you’re totally hooked earning enough to treat you and the family to a well earning holiday in the costa del brava.

Problem is bookmakers won’t take any of your bets while your abroad, so any time away will be lost earnings for the year.

Fortunately you read a post on a forum where a guy used a VPN while outside of the UK, which allowed him to continue matched betting and his winnings ended up covering half the cost of the holiday.


Why You Can’t Gamble Abroad

So why do bookmakers block punters when gambling outside of the UK?

It’s all down to licencing and regulation.

Each country has its own gambling licence which bookmakers have to apply for before they can operate in that country. Even though a specific bookmaker may have a UK gambling licence there is no guarantee they will have licences in other countries.

There may also be different regulations and rules between countries that restrict certain types of bets.

You also need to careful as some bookmakers may not warn you of licencing restrictions in certain jurisdictions.

In one case, while the bookmaker did not restrict the punter from placing a bet outside of the UK, they refused to pay any winnings as it breached their licencing rules.

So as you can see while some sites may not automatically block you, some may just take your hard earned cash and refuse to pay even if you win.


There are some bookmakers such as Skybet that will list all of the accepted counties where you can use your account abroad, so it’s worth checking out first.

Every time you connect to a network, whether it’s your home router or mobile phone provider, your device is assigned an IP address. Think of it as a local area postcode which allows mail (or in this case bytes of data) to be sent back and forth to your device.

It’s this IP address that bookmakers use to find your approximate location (within a mile or two).

But there are ways to change this address, making bookmaker think your in one location when in fact your entirely somewhere else. And that’s with a VPN.

So what is a VPN?

A Virtual Private Network (or VPN) is a remote private network that extends over a public network, it allows users access as if it were part of the same localised network.

Lets use your home and work networks as an example.

Both your home and work are private networks, separated by a wider public network (the web).

What a VPN does is that it allows both private networks to be connected together securely, as if they were part of one whole private network. Meaning users can search for and find other computers on that virtual network, but in reality they could be in different cities or even countries.

How do VPN’s hide my location?

The beauty of these virtual networks is that you can use them as a “proxy server” to connect to other public servers such as bookmakers indirectly.

When the bookmaker connects to you they will not see your devices actual destination address, they will only see the address of the virtual network you are connected to.


So if you happen to be outside of Blighty on your holidays, and you connect your mobile or laptop to a VPN within the UK, the bookmaker will only see the location of the VPN.

And not the reality of you placing matched bets by the side of the pool in Cyprus.

OK so this sound really technical trying to set-up a VPN connection, I wouldn’t know where to begin??

The great news is you don’t have to have a Phd in computer science to set one up.

And most of the time it should take less than 5 minutes to get you up and running!

There are a number of online companies now that provide VPN services for a ridiculously modest fee (compared to your matched betting earnings over the same period).

So instead of setting up and maintaining a local VPN in your home, these companies have servers based internationally and only requires software or mobile app to connect to.


Benefits of using Matched Betting VPN when Outside UK


Not all VPN’s are created equally

While VPN’s are great proxies to hide your precise location, they do have their flaws.

VPN vendors have huge banks of servers to handle all of the traffic from their users, so they have a specific number of locations (which are generally found in major cities) in any one country.

The issue with this is that some of these IP addresses are well known to be dedicated VPN servers, which defeats the whole point of using them in the first place for our exercise.


You see VPN’s are generally used as a secure connection between networks, they were not intended to be used as a proxy to provide geographical anonymity for users.

VPN’s do have other practical uses such as proxying to video streaming services such as BBC iPlayer or Netflix. Ever heard that the US generally has much more content and newer films on Netflix than in the UK? With a VPN you can proxy to a US server and watch the films you can’t yet see in the UK.

But as we mentioned before Netflix is aware of this sort of practice and has it’s own blacklist of known VPN servers in the US. So even if you are using a VPN, you might not necessarily get to watch US content.

There are however a small group of VPN service providers with “distributed networks” which are not known to video streaming services or bookmakers (coming back to the original subject).

Below is a list of the best “stealth” match betting VPN’s which will keep you under the radar of bookies.


Setup Your Own Home VPN using a Raspberry Pi

Of course it is possible to roll-your-own private VPN in your own home.

The huge advantage of doing this is that the bookmaker will see that you are the same IP address as you normally do, which reduces the chances of you being caught.

The only issue with this is that it takes times to set one up, time which you could spend earning more money with matched betting.

But i’m a sucker for a good challenge and in a future article i’ll show you how to setup a Stealth Fighter Matched Betting VPN using a Raspberry Pi.

It can be difficult to enjoy a well earned break when you’re missing out on some matched betting earnings.

VPN’s provide a simple solution for any matched bettor looking to circumvent restrictions that come with gambling outside of the UK.

Some commercial VPN’s are well known by bookmakers and likely to give the game away, so it pays to use a high-end VPN that allows for distributed network addresses and we’ve given you a few examples of the best Matched Betting VPN’s on the market.

But punters need to be aware of the implications of doing this, as this will technically be in violation of any bookmaker terms and could result in your account being gubbed sooner rather than later.

Maybe it’s just better laying on the sun lounger and enjoying some time away with the family.

If you’ve had any experience of using VPN’s for betting outside of the UK, leave them in the comments section below.

Bovada has been operating for nearly a decade now and during this time it’s made some interesting decisions that’s raised a few eyebrows. From a...

Bet365 WILL Struggle in US Market Without a Partner

William Hill Bet Slip Checker | All You Need to Know...

Bet £20 Get £20
"Best choice for Accumulator Bets"
Claim Now
New customers only, limited one per person. If you’ve previously had a Paddy Power account you will not qualify for offer. Place FIRST bet on any Sportsbook market & if it loses we will refund your stake in CASH. Max refund is £30. Only deposits made using Cards or Paypal will qualify. T&C's Apply